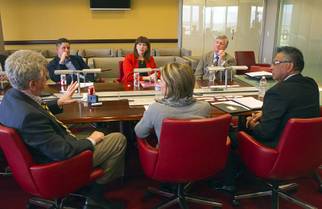 Representatives from various local sectors convened for a “State of the Economy” Panel for Vegas Inc. last month.

To discuss the business lessons learned in 2012 and what is on the horizon in 2013, Vegas Inc assembled a group from different sectors of the local southern Nevada economy for a “State of the Economy” panel. The article is a good summary of the Vegas economy, and a “micro” look at how actions in Washington are affecting local communities. What we like about this article is it quotes people who actually have boots on the ground; people who aren’t spinning this information to conform to an agenda, but living through the same struggles and issues they are discussing. As a whole, the struggles of Las Vegas should be familiar to small businesses across the country.

“The construction industry really drove a lot of the economy in Las Vegas. What I think is happening right now is not only has the loss of the construction industry created a great deal of the recession here, but it has resulted in a trickle-down effect. All the small businesses providing services – a restaurant, cleaners or whatever – reduced their work force and lost a tremendous amount of revenue,” local insurance agency president Joe Hernandez said.

But, the problem throwing the biggest wrench into the proverbial cogs are government regulations and compliance.

“When I joined the bank I’m with, I was on the compliance committee and we had 12 people in the United States working in compliance. Four years later, we have 130 people who do nothing but compliance,” Larry Charlton, head of Nevada operations for City National Bank said, “I’m staring at something on the financial side with the Dodd-Frank Act. It leaves wide open how they’re going to regulate certain things, just like the question of how we are going to pay for the Affordable Care Act. The devil is in the details. Congress talks one way, the regulators talk the other. Because of the problems with banks, regulators got beat up because many of them were bad. Now, they’re tougher than ever.”

The panel would go on to discuss issues such as the recovery of the gaming industry, the possibility of bringing big business to the community, and ideas for improving regional public transportation.